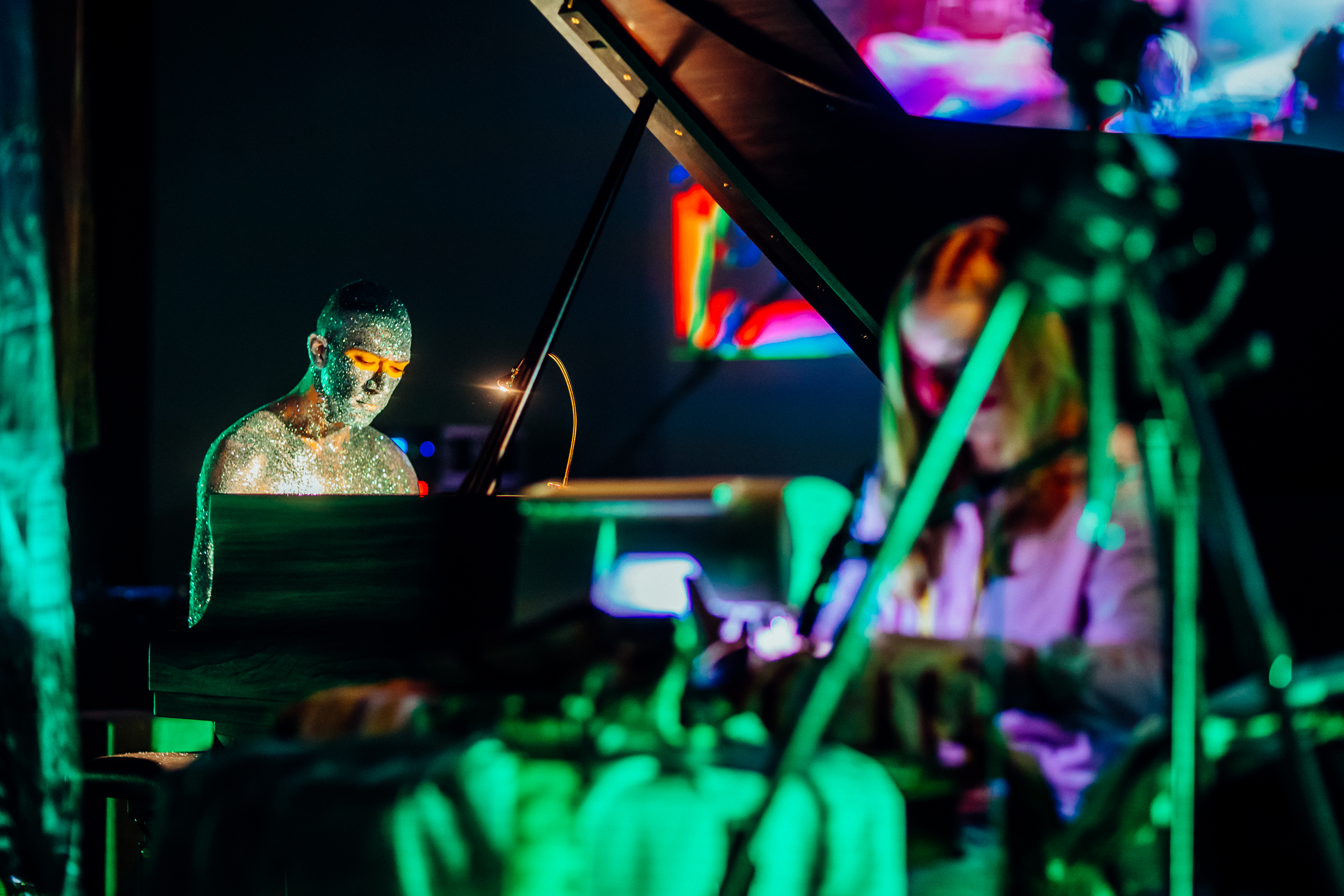 The opening ceremony of The Danube Sea programme arch and the ‘Seam’ performance will be held on Štrand on 22 July at 8:30 p.m.

‘The Seam’ is a portal for entering another reality. Extended Reality performance brings together the world of virtual reality, with a live piano performance, seven sewing machines and a DJ. In this performance for all the senses, artist Jelena Dabić collaborates with pianist Marcelo Gama from Brazil and electronic artist and DJ Carlos Andrés Rico aka Arepabahn from Colombia.

The pianist (Marcelo Gama) represents the Danube, the river that connects seven European countries: a suite in seven movements, a composition by Jelena Dabić with Arepabahn electronics and seven sewing machines.

In the musical sense, folk songs and traditional children’s songs of the Danubian countries form the basis of the composition. Each movement is based on a traditional melody. Each melody originates from one of the countries through which the Danube flows, starting with Germany, then Austria, Slovakia, Hungary, Serbia, Romania and finally Bulgaria. As a European trade route, the Danube connects and at the same time separates people, nations and ideologies from each other. The seven countries through which the Danube flows are connected by borders. The Danube unites them. Seven cultures that cannot be separated from each other. The stitch, as a symbol of connection, tearing, as it still belongs to the repair of a piece of clothing – stands like the Danube itself as a connecting element, and therefore represents the motif of the work.

As Marcelo Gama plays the composition, a diverse piece of clothing is created. Seven sewing machines work hard to create a unique piece. Designer Nikola Panrorov created the costume and each part of the costume represents a Danubian country. The futuristic sound with different world traditions of the Arepabahn is incompatible with the sound of the piano at first, but actually merges with it and floats in like the Danube flows and plunges into the Black Sea. His DJ sets are cosmic and danceable and range from ritual music to electric experimental sounds, inviting the audience to interact with dance rhythms. After each movement of the composition, a new piece of clothing is put on the pianist. He dressed and the costume is complete at the end of his performance – unified and complete, and at the same time marked by the industrialized countries through which the river flows. The seven cultures, which cannot be separated from each other, are like a piece of clothing that, if a part, sleeve or leg is missing, no longer fulfils its purpose and becomes non-functional.

The sound of sewing machines interrupts the melody. Still, the sound is stronger, it breaks through, it stays and keeps moving. Europe is a melodious piece of clothing, and the Danube is the seam of Europe.